This little friend, Winston, was such a big and brave heart and he is now breaking mine. Always my crazy little boy, I was never allowed to sit without him in m lap. We had to return him to heaven yesterday, and I can’t help but feel a tribute needed to be written to acknowledge his big and beautiful life.

After long dealing with spinal pain, it became time to say goodbye and return this little angel to heaven. Winston passed away peacefully in his home, held lovingly in his Papa’s lap on a plush blanket, surrounded by his Mama and brother.

Winston is survived by his Mama and Papa (Glenna and Don), brother (Conan), birth brother (Benny), Nana (Daisy), and many aunts, uncles, cousins and loved ones.  He was predeceased by his birth Mom (Bella) and his grandparents who are now spoiling him in heaven.

Although only 4 lbs (pre-poop), Winston could have a tough exterior (ask any of the big dogs at the dog park that would come running up to him only to be fiercely told where to go). In fact, there was a day when the Mama was walking him around the close and there was an RCMP K-9 suburban parked there with a rather large shepherd in the back. That didn’t phase Winston, for he was clearly ready to tear a strip off of this furry member of the force for being parked on the street without his permission. Winston was at the end of his leash, pulling and barking as loudly as he could, ready to rumble. And the suburban began rocking with the shepherd inside returning the vehement argument of barking and pacing back and forth quickly. It was a relief that the RCMP vehicles are also designed to be safe in criminal situations.
Although he was loved, Winston would not even be an annoyance caught in this dog’s teeth if he got out of the vehicle and the Mama wasn’t so sure how she would be able to get in the middle to stop it.

Winston often lived up to a rather snooty name with people, but once you got close enough and began scratching him he would curl right in to them. A bit of a clean freak he would reach for his Mama’s hand whenever sitting with her to be sure to bathe it incessantly with his kisses (quite the long tounge out of such a tiny body). Winston was also a bit of a food connoisseur, rather particular over what he ate although faves included cheese, rotisserie chicken, cheese & rice omelettes, hamburger, meat juice (water off the boiled hamburger), duck & sweet potato treats, and his cookies and chewies from the vet. His sniffer worked splendidly and it didn’t matter what you would try to hide medication in, he would smell it out and, if you could somehow think you got it in (after the 3rd try) the pill would often be found on the floor later.

This little fella was relentless, be it with his camping “girlfriends”, his toys (faves being the chicken that he would stay up all night to protect on the dresser, the pig that was as large as him, the alien or the little shoe) and his favorite game if all time was digging the toy out of his blanket – then keep away from his bigger brother who would wait for Win to get the toy from the blanket and then come to steal it from him. Win was fast, especially on carpet, and could spin circles to cut away and keep the toy….then Conan would lose patience and just put Win in a headlock. Poor Win never gave up the game though. He and his brother enjoyed tug of war together and though 1/3 the size of his brother, Win was a force to be reckoned with (his determined streak came in handy). Another favorite activity for Winston and Conan was digging for treasure with their Papa; Papa would hide under a blanket with a squeaky toy, Conan would usually find a way under and Winston would be on top digging to China to try to dig his way through to the toy. He would be relentless going after the toys, and it was more than one occasion that we considered his need for a helmut as he would jump for it and sometimes land on his back or knock his head on the floor. There were a few emergency room visits for this little gladiator, but it never stopped him.

Winston (AKA Win, Winnie-boy) was not a fan of cold weather, rain or snow. Sharp little fella, he would pee or poop on command, unless it was really cold and then we would catch him fake pooping to try to quickly get into the house again. He always made us laugh with the way he would walk along while pooping – almost as if to say “it wasn’t me”. Win had a hard time being left in the house with no humans, and would pee on the door we left from (why he had to pee like that we don’t know). For the last 4 or 5 years Winston has been wearing diapers when left in the house, poor little fella, but to whomever created those washable wraps, thank you.

Winston loved to camp and was able to spend his last weekend camping and riding on his Papa’s quad, feeling the wind on his face (which was always so funny to see him enjoy because he would hate it if you blew on his face or head…..hmmm…maybe it was our breath). They sat enjoying each other’s company with Win snuggled to his Papa’s chest and he enjoyed the day snuggled into his camping blanket on his own lawn chair.

Winston taught his Mama how to be brave and never give up, encouraged her to slow down and rest, watched over her and kept her company in his little bed as she soaked in the bath, and how exciting getting to bed at a decent and regular time each night could be. He brought many smiles and laughter to her, and even on the occasions when he drove her crazy with some high pitched barking (often from out of nowhere, laying in the middle of the house just to get his brother going) Winston always let her know that she was loved and not alone. From coffee in the chair in the morning to tucking into bed for the night, his attention to making sure her hands were clean was unfailing. His welcome home, no matter how short a time she was away, was always a joyful reunion of dancing in circles and barking before she was even in the door letting her know he missed her and was there waiting to joyfully reunite. When she and the papa got engaged Winston’s nose seemed a little out of joint – it would seem he felt that that Mama “belonged” to him and not the Papa, and he would try to chew the engagement ring off of her finger. It was the only ring he ever tried to remove from her hand, though he didn’t need to put a ring on the finger to capture my heart.

We would like to thank all the staff, and Dr.s Hayley and Katie, at  Lomsnes who took such good care of our boy. In particular we especially want to express our gratitude to  Dr. Lisa who came to help us return Winston to heaven peacefully. And a special thank you to the family and friends that have shown their love and support as we grieve the loss of a life truly well lived.

Winston, you are no longer at our side, but forever in our hearts. 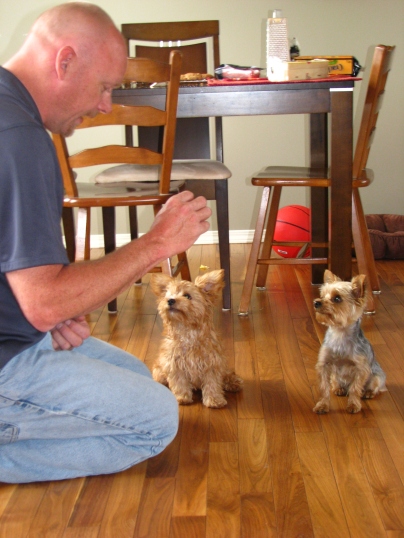 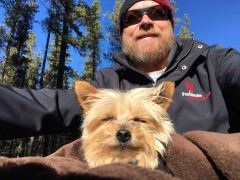 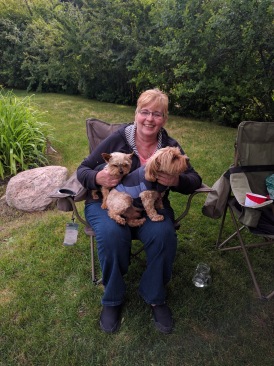 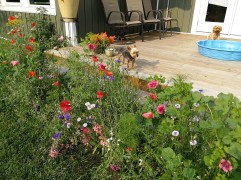 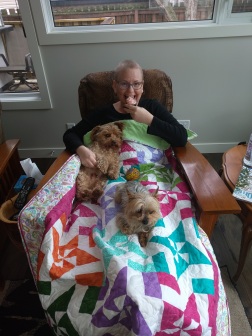 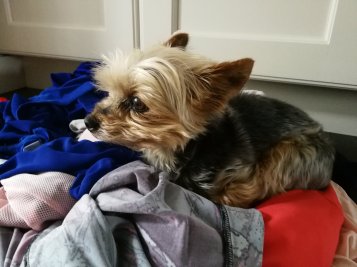 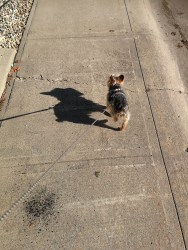 With much love, Glenna

3 thoughts on “Can We Ever Truly Prepare for Goodbye?”