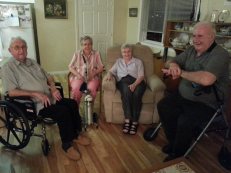 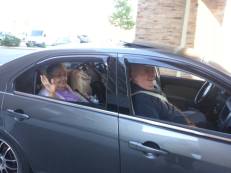 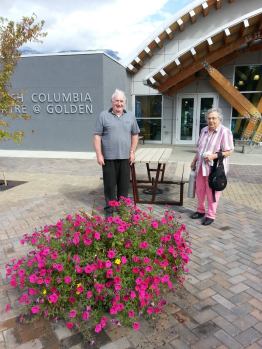 As I am traveling the only images I currently have to share are from a roadtrip in 2013 with Mom & Uncle James to visit Uncle Pat & Auntie Jean.

I got word yesterday that my Uncle James had passed away – some of you may have known him as Rev. James Hagel (not the young one). Although it was hard news to receive, it was not altogether surprising as this was a large man who lived life fully with vigor and the last few years his body didn’t allow the “boyhood escapades” anymore. The last visit I had in person with him he had just moved to a new room in Providence Care Centre and said to me that he felt this was a good room to die in (he always was a little blunt). He promised me it wouldn’t come for some time, but when it did he was content with where he was.

Having 2 uncles in the family that are Roman Catholic priests (both Uncle Martin and Uncle James) gave me a little bit of a different view of the Catholic faith. One or the other, or sometimes both, married many of the family as well as performed baptisms, Eucharists, sacraments of the sick, blessings of homes, and many funeral masses were said for their family Their lives were faith-filled, but knowing these two men of faith as family also allowed for knowing the human side of faith – that side that would tease their nieces and nephews, instigate shenanigans, keep us entertained, and have fun with our parents as only siblings from a large family can do when they get together. We lost Uncle Martin years ago, but Uncle James and I were quite close.

There was llama babysitting (with the “payment” being that the next baby girl would be named Lady Glenna), being dumped in the creek on a motorcycle that he stalled out (in fairness I had warning as he had already done the same to his aunt), the poop mobile (dune buggy that he loved driving over bear scat at high speeds to “christen” his passenger), his woodworking, wine making (though he REALLY should have found a recipe for the dandelion wine he tried to make one year), and many visits in his hot tub. And I am pretty sure most of my cousins can relate to the words yuckafrutz and schmootz keigla (though I have no real idea how to spell either one).

But there were also many lessons around faith. It was having mass at Family Reunions or as the llamas would meander past when he was in Longview, having heart to hearts over a broken marriage and forgiveness from the church (even if sitting in his hot tub while doing so), praying together over meals and listening to him talk about how impacted he was by his experiences with Project Rachel.

I grew up hearing stories of his time in Malawi and when my parents went to visit him there. Some of the artifacts I recall were a chair made from 2 large pieces of wood that fit together through a slat, he actually made one for me (after some relentless “encouragement” on my part) that I cherish dearly and an ironwood elephant table (that now sits in my living room and reminds me of him). Always creative, Uncle James would tell how they had invented a gas stove for the village he lived in out of a wooden dome type of structure that they would shovel the chicken poop under. There was a hose from the dome to the oven where they village cook (sort of one place) would use the methane gas from the renewable resource to power their cooking. As the gas would be used up the dome would sink and they knew they needed to refill it. It was hearing stories like this, and others (especially when he would visit and share memories with his siblings and in-laws that had visited him there) that always created a desire in me to get to Africa, and now ultimately has been part of providing opportunities for children in 2 different schools in Kenya.

And there was the other human side of Uncle James that we all laughed about and teased him lovingly over. Admittedly he was awful with names; children baptized by Uncle James weren’t always done so with the same name given to them by their parents – but I am sure that he could perhaps clear up that clerical error now that he is with St. Peter. One of the phrases I recall him saying most often was “oh, so who do we have here now?“. There were many times I told Uncle James it was very lucky that he had chosen to become a priest because no other man would get away with some of the things he would say….allow me to explain. His nickname for me was Little One, and admittedly through the years my weight has gone up and down so sometimes he would exclaim “oh, you are not so little anymore” or “oh you are little again”.

I believe there was a farmer in his heart (who can forget the Llama Golf Classic), and a young and mischievous boy in his spirit. His deep “ho-ho-ho” laugh came from rooted within his belly and I will miss hearing that but take comfort in knowing that he is once again able to get up to shenanigans with all of the family that has gone to heaven before him.

Until we see each other again Uncle James know that you will be missed dearly and I am sending you much love, Little One.

One thought on “Godspeed Uncle James”